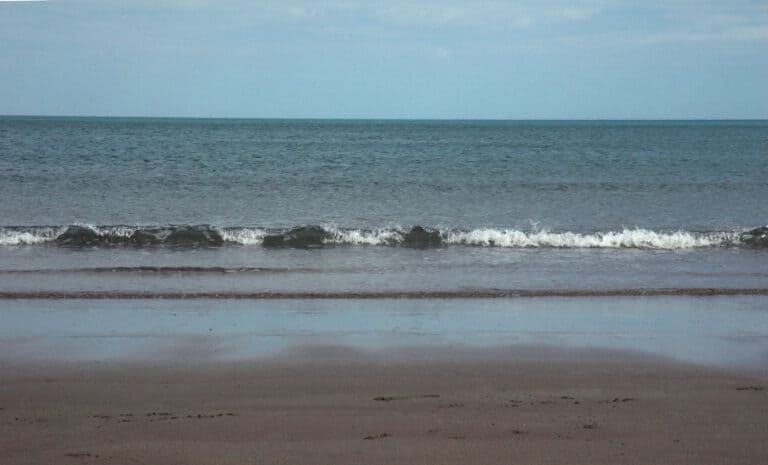 The South Hams area of Devon is blessed with a number of top class beaches, from secluded coves to sweeping bays, for surfers, sun-worshippers and naturalists. Whether the sun is shining or the waves are crashing, there's always a beach to enjoy.

The South Hams area of Devon is blessed with a number of top class beaches, from secluded coves to sweeping bays, for surfers, sun-worshippers and naturalists. Whether the sun is shining or the waves are crashing, there’s always a beach to enjoy.
There is plenty of information on all our beaches at the South Devon Beach Guide, but this is our personal summary. Don’t forget that most beaches are at their best (and biggest) at low tide which gets later by about an hour every day, so remember to check the tides for maximum fun.

OK, this is not strictly South Hams, but that shouldn’t stop you exploring. If you enjoy a secluded beach, then try Man Sands or Scabacome Sands (which is designated as a Naturist beach). These are accessed by pretty steep paths, but that’s why they are quiet! There is a National Trust Carpark near Woodhuish TQ6 0EF, though you could walk about from the Pottery (2-3 hours).

I would also recommend Elberry Cove and Churston Cove which lie on the Coast Path west of Brixham – park at Broadsands and head south. If you keep walking to Brixham (about 1 hour), you can now enjoy great fish and chips at Rockfish.

Unless you like crowds, hot dogs, and jet-skis, give the other beaches of Torbay a miss (Broadsands, Goodrington, Paignton, Preston, Torquay), though they can be quite pleasant out of season and are definitely sandy rather than shingle. However, the beaches at Babbacome and Oddicombe just north of Torquay are worth a visit if only for the Cary Arms hotel and restaurant – great to sit on the terrace on a fine day.

The first few beaches and coves south of Dartmouth can be reached by walking from The Pottery along the South West Coast Path. Castle Cove lies just below the Castle (15 mins walk from the apartment) – it’s popular but it’s clean and sheltered. Further along the coast path are Sugary cove and Shingle Cove – a bit more effort to reach, but popular with seals as well as the occasional tourist.

Keep walking far enough through Stoke Flemming and you reach Blackpool Sands, though it’s easily accessible in 10 mins by car or by bus from Dartmouth. Don’t be put off by the name or the fact that it’s not actually sandy – this is an award winning quiet, clean beach that can be enjoyed any time of year. It does get busy in the high season, but is big enough to take everyone. Blackpool also features one of the Venus Cafes, one of the few restaurants opening right onto the beach. If you do want to walk from the apartment, there is a more direct path through Little Dartmouth, rather than the Coast Path.

Coming over the hill a couple of miles past Blackpool, you will get a glorious view of the beaches of Start Bay. The first you come to is Slapton which at 3 miles long is big enough to find sunshine and solitude any time of year. The north end above the carpark is an unofficial nudist beach, but tends to be the quietest area. There is another carpark half way along, but most people gravitate to the southern end at the village of Torcross probably to get the best fish and chips at the Start Bay Inn. Behind the beach there is also a nature reserve on the freshwater ley.

The next beach along is Beesands, much quieter than Slapton, probably because it is harder to reach. However, it is just as pleasant for walking, swimming and sunbathing as Slapton and boasts a good pub/restaurant at the Cricket Inn. Better still there is the charming fish restaurant at Britannia at the Beach , where you can also buy freshly landed local fish. My tip is actually to park at Slapton about an hour before low tide, walk along the beach to Beesands (about 30 mins), have lunch and take the coast path back to Slapton, enjoying the views of the bay.

Alternativvely, you could keep going along the coast path to Hallsands , though you can drive too. The beach at Hallsands is not as smart as its neighbours, but it is a great for a walk and is again very quiet. Walking south on the coast path you can view the remains of a collapsed village which was abandoned in 1917. Hallsands is also a good starting point for a walk to Start Point Lighthouse (about 1 hour), a long steady climb with great views back across Start Bay – on a clear day you can see 40 miles or so across to the cliffs of Lyme Regis. The lighthouse is regularly opened to the public (See open dates).

If there is one small disadvantage to the beaches above it is that they are all more or less east-facing, so aren’t “evening” beaches with a sunset. On the other hand they tend to be sheltered from winds (which tend to be from the south west). However, as you round Start Point, the beaches face south…. to be continued in the next blog post…